The water table is constantly in motion adjusting its surface  to achieve a balance between the recharge and outflow from the subsurface storage.

Fluctuations  in the  water level in a dug  well during  various  seasons  of the  year, lowering of the groundwater table in a region due to heavy pumping of the wells and the rise in the water table of an irrigated area with poor drainage, are some common examples of the fluctuation of the water table.

In a general sense, the water table follows the topographic features of the surface.

In the water table intersects the land surface the groundwater comes out to the surface in the form of springs or seepage.

Sometimes a lens or localized patch of impervious stratum can occur inside an unconfined aquifer in such a way that it retains a water table above the general water table (Fig. 9.3).

The  position  of  the  water table  relative  to  the  water  level  in  a  stream determines  whether the stream contributes  water to the groundwater  storage or the other way about.

Such streams which receive groundwater flow are called effluent streams (Fig. 9.4 (a)). 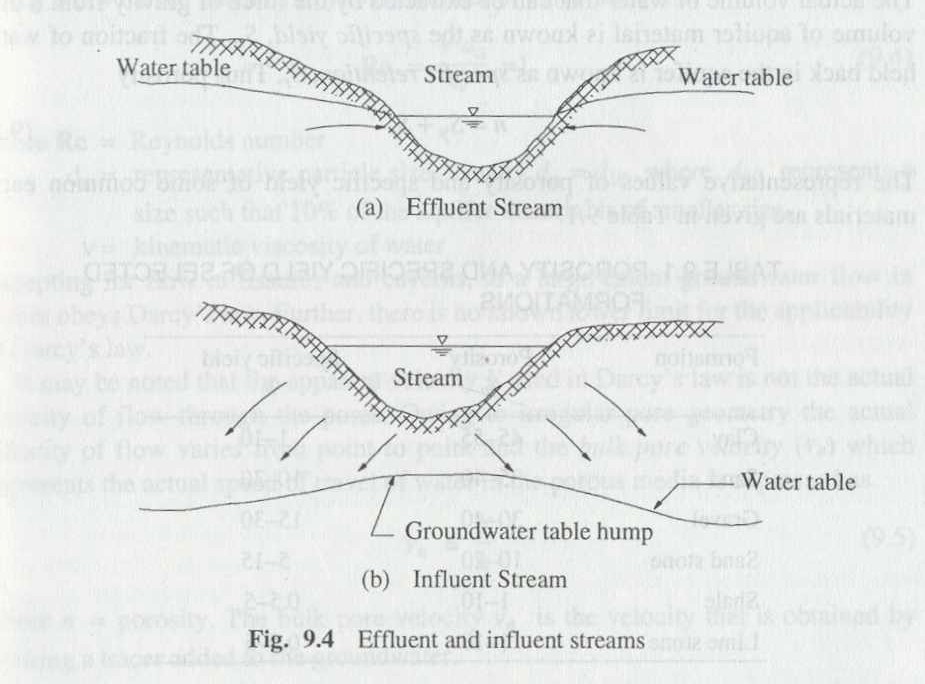 Such streams which contribute to the groundwater are knows as influent streams. Intermittent rivers and streams which go dry during long periods of dry spell (i.e. no rain periods) are of this kind.

The important properties of an aquifer are its capacity to release the water held in its pores and its ability to transmit the flow easily.

These properties  essentially depend upon the composition of the aquifer.

The amount of pore space per unit volume of the aquifer material is called porosity. It is expressed

While porosity gives a measure of the water storage capability of a formation C the water held in the pores is available for extraction by Pumping or draining by gravity.

The poles hold back some water by molecular  attraction and surface  tension.

The actual volume of water that can be extracted by the force of gravity from a unit of aquifer material is known as the Specific yield Sy.

The fraction of a unit held back in the aquifer is known as specific retention.

EVAPORATION Evaporation is the process in which a liquid changes to the gaseous state at the free surface, below the boiling point through the the transfer of heat energy. Consider a body of water in a pond. EVAPORATION PROCESS The molecules of water are in constant motion with a wide range of instantaneous velocities. An addition […]

DARCY’S LAW Darcy’s law – In 1856 Henry Darcy, a French hydraulic engineer, on the basis of his experimental findings proposed a law relating the velocity of flow in a porous medium. This law know as Darcy’s law can be expressed as V = Ki Where V= apparent velocity of discharge =Q/A Q= Discharge A= […]