Each species of an organism has a specific number of chromosomes in its somatic cells.

These chromosomes are found in pairs. At the time of formation of gametes the chromosome number is reduced.

Alterations in the number of chromosomes from the diploid set is called numerical chromosomal aberrations.

It is also known as ploidy. There are two types of ploidy they are euploidy and aneuploidy.

Euploidy is the variation in the chromosome number that occurs due to increase or decrease of full set of chromosomes.

In most of the plants and animals, the somatic cells contain two sets of chromosome.

Diploidy is formed by the union of two gametes during fertilization.

Addition of one or more sets of chromosomes to the diploid set results in polyploidy.

It is commonly noticed in plants and rare in animals.

They are of two kinds – autopolyploidy and allopolyploidy.

Addition of one or more haploid set of its own genome in an organism results in autopolyploidy.

Watermelon, grapes and banana are autotriploids, whereas apple is an autotetraploid.

Increase in one or more haploid set of chromosomes from two different species result in allopolyploidy.

Triticale is the first man made cereal.

Then the chromosome number is doubled using colchicine and it becomes an hexaploid. 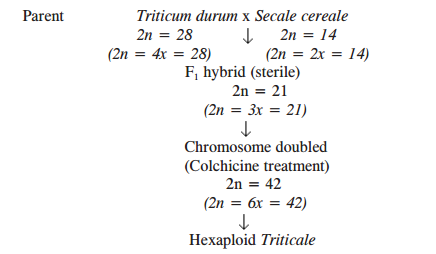 Variation that involves one or two chromosomes within the diploid set of an organism results in aneuploidy.

It is of two types – hypoploidy and hyperploidy.

Decrease in one or two chromosomes from the diploid set is described as hypoploidy.

There are two types of hypoploidy – monosomy and nullisomy. Monosomy is due to loss of a chromosome from the diploid set

Nullisomy is the condition in which a pair of homologous chromosomes is lost from the diploid set i.e. 2n – 2.

Addition of one or two chromosomes to the diploid set of chromosome results in hyperploidy.

There are two types of hyperploidy – trisomy and tetrasomy.

Trisomy results due to the addition of one chromosome to diploid set of chromosomes.

It is represented by 2n + 1. Trisomics are observed in Datura stramonium.

Tetrasomy results due to the addition of two chromosomes to diploid set of chromosome.

Polyploidy plays an important role in plant breeding and horticulture.

0 Polyploidy has more vigorous effect than the diploids and results in
the production of large sized flowers and fruits.

Hence, it has economical significance.

It plays significant role in the evolution of new species.

Polyploidy results in the changes in the season of flowering and fruiting.

It leads to the formation of new varieties which show high resistance to disease and increase in yield.

Both euploidy and aneuploidy in man cause congenital diseases.

Polyploidy varieties like apple, pear, grape and watermelons are cultivated because of their large size.

Structure of DNA and Function of DNA

Phytohormones Cytokinin Back to botany topic list Cytokinin is a plant growth substance, which stimulates cell division. This was isolated by Miller and Skoog in 1954 from Herring fish. Following the discovery of kinetin many other compounds showing similar activity were discovered. These are collectively called cytokinins. The cytokinin found in the zea mays is […]

Crop diseases and their control Back to botany topic list The diseases in crop plants result in a heavy loss of crop yields and cause considerable damage to crops year after year. To check the plant diseases, it becomes necessary to know about the cause of the diseases, of the life history of the causal […]