Chloroplasts are the actual sites for photosynthesis.

All green parts of a plant are involved in photosynthesis.

Leaves are the most important organs of photosynthesis.

In xerophytes like Opuntia, the stem is green and it performs photosynthesis.

Over half a million chloroplasts are present in one square millimetre of a leaf.

It measures about 4 to 6 micron.

A typical chloroplast of higher plants is discoid shaped.

It is a double membrane bound organelle containing chlorophyll, carotenoid,

The space enclosed by the envelope is filled with matrix called stroma.

In the stroma, many grana are embedded.

In each granum, several disc shaped lamellae are found.

They resemble a stack of coins.

This structure is known granum.

Generally a chloroplast contains 40 to 60 grana.

The photosynthetic pigments are found in grana.

The pigments involved in photosynthesis are called photosynthetic pigments.

Magnesium is an essential component for the formation of chlorophyll.

Chlorophyll ‘a’ is a universal pigment present in the plants in which water is one of the raw materials for photosynthesis.

Chlorophylls are highly efficient in absorbing solar energy and they are directly linked to photosynthetic electron transport.

Photosynthetic pigments other than chlorophyll ‘a’ are generally called accessory pigments

Photosynthetic pigments occur in the granum.

About 250 to 400 pigment molecules are present in a photosystem.

Two types of photosystems are found in the granum.

The primary function of photosystems is to trap light energy and converts it to chemical energy.

The energy absorbed by accessory pigments is transferred to the chlorophyll ‘a’.

The overall reaction of photosynthesis can be written as follows.

The reactions of photosynthesis can be grouped into two – light reactions and dark reactions.

The photosynthetic reactions in which CO2 is reduced to carbohydrates making use of ATP and NADPH2 generated by light reactions are collectively called dark reactions. 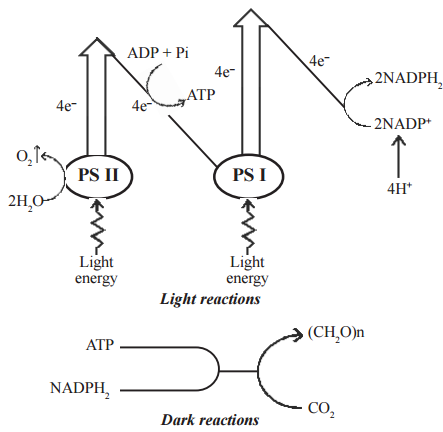 For more details about Mechanism of photosynthesis click here